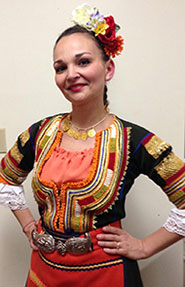 Marieta Mircheva has been a co-choreographer and performer of “Ludo Mlado“ dance ensemble since 2004. Marieta is a Bulgarian native who has been dancing and performing since the age of 8. By the age of 13, she had over one hundred performances and several European dance tours as a member of Folk Dance Ensemble “Zdravets”. In 1998, Marieta graduated from the National School of Dance Art in Sofia, Bulgaria with a major in Bulgarian Folk Dances. After her graduation she moved to the US and joined the Balkan Dance Classes led by Peter Petrov. In 2001, Marieta founded the first performing Bulgarian folk dance formation “The Roses”, which group later affiliated with ensemble Ludo Mlado. Marieta is thrilled to be part of Ludo Mlado and to have the opportunity to dance with such talented and fun individuals.