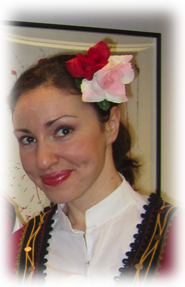 Ivana Dinkova has always been fascinated by the beauty of Bulgarian folk dance and culture. She started dancing at the age of 6 and has been performing for 13 years in Bulgaria; spreading the magnificence of the folklore and tradition from many different regions in Bulgaria trough performances in various European countries. After moving to Boston in the beginning of 2009, Ivana reconnected with the Bulgarian folk dance and joined Ludo Mlado.